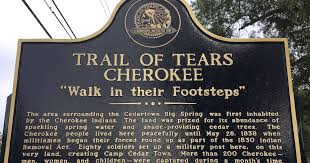 Imagine walking around a thousand miles from where you used to live to a place you have never even seen by order of the government.  Not all who are with you will survive this grueling walk as many did not.  Now imagine that one of those who will perish is your youngest son.  The Trail of Tears represents a great suffering of the indigenous people who once lived peacefully in the hills of North Carolina and were forced to march to their new home in Oklahoma determined by a man they would never meet.  Were this to be the only place in our history where cruelty was enforced, it would be bad enough, but this reminds us of how we must not allow this injustice without raising our voices.  We have done this in some of our cities and you have seen the response.

Laying to Rest Our Youngest

Soldiers are not patient with us,
We who travel by foot across the miles,
The children are always complaining,
Many of them sick from the journey,
These lands hold nothing for us,
Even through the promises
Written out in the treaties.
I was a hunter,
Bringing back game the Great Spirit provided,
But am no longer,
For now I must tend a plot of land,
See how generous they are,
But first you must enter as you were born
Helpless, needing assistance to survive
​If you survive.


Yesterday my son, our youngest had a fever
It got worse through the dark, dark night
Until the morning when he had left this world
For the next in the arms of a hawk who flew over his grave.

The captain told us to cut our ceremony short
We have so many miles yet to go,
What of the green lands we have left behind
For grass that rattles like bones in this unrelenting sun?
We were not allowed to pray the prayers of our people,
In case the words we speak are of treason and treachery
Words the soldiers could not translate.
So we walked on feeling the tug of his mother
As she did not want to leave him
His first night all alone
Out here in the prairie
That does not know who we are.

But I said a silent prayer
Telling him to take the hand
Of those who you will see your arrival
When the hawk swooped down
To carry his soul to the heavens
Where he could be at peace
In the arms of his ancestors
As they all look down on me
And wonder when I will pick up the tomahawk,
When I will carry the spear,
And tell these yellow dogs,
I will not leave the land of my people,
But I know they have lost faith in me,

Nothing can heal these wounds
Of laying to rest our youngest,
Before he could feel the force of life
Come down and rest upon him.
Soldiers yell for us to move on,
From the saddles of their horses,
Resting on their rifles,
They do not know the strain of this journey,
They have bartered nothing along the way,
While we dwindle
Cry out in our last breath
Fall face first into the dust between the dried grass.