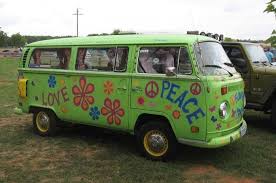 Growing up, I was surrounded by history in central New York State, but little did I know that we would inadvertently stumble on a little history ourselves.  It was the Summer of Love and in Cortland County one of the biggest musical events took place which we accidentally bumped into as my father decided to go sight seeing looking for lakes...and instead found the roads flooded with hippie vans.

There was a stop sign on the way to dad’s sister’s house in Manlius where someone had spray painted “the War '' underneath the “Stop.”  My father would grumble under his breath, “Damn hippies.”
Around the time I started at St. Matthews School where the penguins would teach us the three R’s, more and more people were walking around with long hair and beards wearing multi-colored shirts with no clear designs.  They called them tye-died, but I could never figure out why. I had to wear a white shirt, tie and my hair trimmed around my ears and tapered in the back. My dad preferred a crew cut, because it was easier to take care of.  Sometime in seventh grade, most of my male classmates began to let their hair grow out and little by little, so did I. I did not want dad to notice and call me a damn hippie, but I wanted to fit in which was one thing I had difficulty with even in a school where everyone was supposed to dress the same.
My classes were filled with the children from Italian and Irish families and my classmates, whose parents were Catholic, practiced the rhythm method of birth control as God had intended which meant most of them had over a dozen brothers and sisters.  Since I was the only child from my dad’s first marriage and I had only two brothers from his second marriage to Carole, I was considered an outcast of sorts. What also began to happen was that these older male siblings were serving in Vietnam and at least once a year, we, as a class would gather at the church for a funeral service of one of these siblings who was killed in action in Vietnam.  I remember some of the names of these families, but it was always the same, their mothers and fathers would be sitting in the front pew of the church with uniformed soldiers posted around the flag draped casket in the center aisle of the St. Matthew’s Church. We would sing some church songs or hymns say a few prayers as the priest would speak of the dedication and sacrifice of the soldier lying in the casket.  Mother would sob openly into a handkerchief as the father would look on stoically and his children would squirm restly as the service proceeded.
“Jesse will be absent for the rest of the week.” Our penguin teacher would whisper to us.  I could see Jesse. His eyes red, his nose running, appearing as if he had lost his best friend.  One of the soldiers would hand the mother, who was still wiping her tears, a triangle folded flag.
“Cool.” One of my classmates exclaimed when he saw the mother take the flag, “That would make a neat flag for our fort.”

Watching the news, there was a sit in reported at Syracuse University where the national guard was called into to preclude the violence that was expected by the administration.  My father had graduated valedictorian of his class while Jimmy Brown was the main star of the Orangemen football team with a freshmen known as the Elmira Express. Ben Schawalter was the coach of the National Championship team known for his three yards and a cloud of dust philosophy with a vintage line of halfbacks that would make their mark in professional football.  When dad and Carole got married for their honeymoon, dad took her to South Bend, Indiana to watch Notre Dame play Syracuse where a lineman named Sweeny was called for a roughing the kicker penalty that cost the Orangemen the game. Sweeny would go on to become an all-pro guard for the Chargers in the NFL, but to dad the sin was unforgivable, not Sweeny, but the refs for calling such a penalty.  Carole froze since it was in November in Indiana and the wind was bitterly cold.
Seeing the news, dad once again grumbled, “Damn hippies.”
Dad would take me to some of the games at Carrier Field and we’d sit with the coach’s sister who had some choice words for the reffing. It was so much a part of my memory of him.  The soldier who came home from Korea and became a scholar and then he married a woman from another echelon of the society. Before I turned three, she had already passed away. Dad was left with a rambunctious child and a full time career.  Back in those days the odds of being both father and provider were not in his favor. He married Carole and she walked into an instant family. They would have two more children, Stephen and Tom who would become my half brothers. But my hair was getting longer and I started listening to John Lennon after he ran away from the Beatles upon his girlfriend’s insistence and broke up one of the most commercially successful bands in Rock ‘n’ Roll history.  His moxie was just too irresistible to a thirteen year old looking for a way to rebel from the establishment as it was being called by the Drop Out Generation.
Then to complete my rebellion Andrew Lyodd Webber produced Jesus Christ Superstar and I became a full fledged rebel and, yes dare I say, Hippie.
“Frosty, when was the last time you got a haircut?” He asked one evening over dinner as I was careful to tuck my thickening hair behind my ear.  My name in the family was and still is “Frosty.” I hated the nickname, but you can’t fight a tide no matter how strong you think you are.
“Carole, Frosty needs a haircut.” Dad said flatly.
“George, he is growing it out like the rest of his friends.” She pleaded my case.
“He’s looking like one of those damn hippies.” He growled as both of my little brothers eyes widened at the “D” word.
“He’s not.” She said.
“Alright, but not much longer.” He huffed and everyone bowed their heads in agreement. But I did not get it cut right away.

It was August, summer break, during the Summer of Love as it would be dubbed by the press and dad was sweltering in the heat and humidity that was common for our summers.  So humid was the air, it felt as if you had taken a sweat shower. Finally he looked at Carole who was reading one of her books and said. “We have to get out of here.”
“Where are we going?” She asked surprised at his suggestion.
“To look at lakes in Cortland.” He used his hand to wave away the hot humid air, but this was not a solution. “C’mon kids, we are going for a ride.”
Everyone cheered except for me, because I hated to be seen with my little brothers trailing along with my dopey family, but I was irritated by the sticky heat.  I followed him to the big old Oldsmobile in the garage. Dad loved Carole’s father Harold Bent who would buy a brand new Oldsmobile every two years and sell the old car to dad.  With only two years of driving to church and home, the Olds was a cruising car for the times. With a jerk of the garage door, dad got into the driver’s seat and we were on our way for an adventure of “looking at lakes” as this was one of his favorite things to do at any time.
New York State had a Thruway at the time providing a quick route to either end of the state, but you had to pay to drive on the road.  Quickness and convenience was what you paid for despite my father’s complaining that New York Governor Nelson Rockefeller promised to make this a free highway route once the construction fees had been paid for by the motorists, but that was almost ten years ago.
“Maybe I’ll stop to see my sister, Bev.” Dad said since his sister was living in Cinnitatus, NY with her husband Kirk and four children on a game reserve he was creating on some wooded land near his property.
“Haven’t seen them for quite some time.” Carole remarked holding Stephen in her lap after giving him some dramamine for the drive. The Thruway ran through the center of the city like the canal had during the previous century.  Unexpectedly the traffic got heavy. It was Sunday, the only day when the traffic was light for the most part. Dad spent many hours in bumper to bumper traffic on the commute home.
“What the hell?” He banged his hands on the steering wheel as we crawled through the streets on our way to the Thruway entrance. Carole covered Stephen’s ears for the “H” word.
Looking out the window, I had never seen so many colorful Volkswagen Vans clustered together inching their way for the Thruway.  Dad was flabbergasted as he found himself in bumper to bumper traffic. Finally he exclaimed, “Damn hippie vans!”
Carole covered his ears once again and snapped, “George!”
“Sorry.” He slunk down a bit, but I could still tell he was quite irritated by the unanticipated traffic jam, the road jammed with hippie vans of every color and with big old peace signs painted on them.  Volkswagen vans back then produced a lot of car exhaust along with anything else being burned, either legal or not. “Pot smoking lazy bums.” He growled as we had moved just a few feet, but he could see the super road had become a parking lot of sorts.
“What the heck!” He slammed his hands down on the steering wheel again.
“I don’t know.” Carole shrugged helplessly.  Stephen began to fuss so she opened a carton of juice and soon he was content.
Look at them all, I thought to myself, all on a magical carpet ride to somewhere.  I don’t know where. It was Sunday, August 18, 1969 and the Thruway was a parking lot.
He did manage to turn around and we drove home without seeing lake one in our journey and instead seeing the roads of Syracuse jammed with Volkswagen van, hippie vans.  Later that evening, watching the news, Walter informed us that the final day of Woodstock had taken place in Cortland County, New York. It happened to be one of most famous musical events of all time.  One the evening news, as Walter spoke of this historic event, all dad kept mumbling was, “Damn hippie vans.”