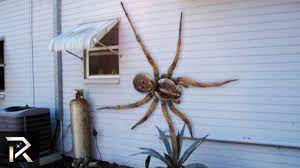 That's My Story and I'm Sticking to it...
Big Bugs

We were on our way to Team Spirit in March 1982 where we would live in canvas housing just like in M.A.S.H. at Kunsan, Air Base Republic of Korea (ROK).  We would spend the night at Anderson, Air Base, Guam.

I knew nothing about the place other than it was an American Territory in the middle of the Pacific Puddle.  It was tropical according to the officer in charge of our ground crew.  He did not mention the jungle.  We'd find that out on our own.

We would be flying tactical ground support with the six F-4's in this show of force to the North Koreans. Part of the agreement Is that we would support ROK and Team Spirit was an annual deployment to honor our commitment.

Little did I know at the time, the North was still at war with democratic South Korea since the treaty was not signed back when my father was in uniform during the Korean War.

It was nearly ten in the evening when our C-141 landed at the base and even as late as that was, it was still over eighty degrees with nearly one hundred percent humidity.  Sweat began to pour down my face as we disembarked the plane with our duffle bags slung over our shoulders on what would be a two mile hike, the second mile would be jungle that the sergeant failed to mention.

"We have no record." The airmen at the desk whose face was now pallid replied as he checked the computer and ledger for the second time.
"We are supposed to spend the night before taking off for Korea." The sergeant rubbed his eyes with his fingers.  There was over sixty of us, Tired from our ten hour flight that included crossing the International Date Line that started the next day a bit early.  None of us was in the mood for a SNAFU.

"Not according to our records." He Checked the ledger one more time without success.  The officer in charge of ground support was already at the Officer's Club after getting billeting into Officer's Quarters where there was always room, like a Holiday Inn.

"So, what am I supposed to do?  I got sixty troops who need a billet." He yanked his thumb in our direction.

" I don't know." His face was now whiter than snow.

"Get your CO on the horn." The sergeant ordered, "Tell him we got sixty exhausted airmen who need a bunk."

"Now what?" The second in charge asked.

"Could sack out in the lobby." He shrugged.

"Half of us maybe." He snorted as the rest of us removed our bags from our sore shoulders leaving about six spare inches in the lobby.

"I hate these SNAFUs." He let out a deep sigh.

"Can I help you?" A weak voice sounded.

"Who the hell are you?" Barked the sergeant.

"Lt. Figgley, night officer in charge of billeting." He answered with a hint of pride in his voice.

"Well here's the deal, Lieutenant, I got sixty personnel who need a bunk." The sergeant said with his voice dripping with irritation.

"That can't be right." Figgley's face was now ashen white, "You guys weren't due in until tomorrow."

"I...um...ah." You could see smoke coming out of his ears. He turned his back on us as he talked into his phone. The airmen at the desk stood behind Figgley, a smile frozen on his face as if he had been turned to stone.

"Barracks G?   Are you sure, sir...of course you are." His smile was more of a grimace at this point. Hanging up the phone, he turned to face the sergeant once again, "Barracks G.  We can billet your entire detachment there."

"Now you're talking." The sergeant Smiled as Figgley handed him some keys.

"I've been here three years and the gate has never been opened since then at least." He mumbled.  We would find out that it had been quite a bit longer that only a paleontologist would be able to make a reasonable guess.

"Also, I have no transportation available until the morning." He bowed his head.

"So how far is Barracks G?"

"About two miles. " His voice sank.

Rolling his eyes, the sergeant turned to us and made an announcement about what we were going to have to do and while it was the best outcome, it was a lot more promising than spending a cramped night in this lobby decorated like a Tiki Lounge.

"Okay folks, time to roll." The sergeant Picked up his bag, checked to make sure he had the key, and walked out the door with the rest of us following him down the dark road.  When We got to the front gate the Security Guard greeted us, "Where are ya headed?"

"Barracks G." The sergeant held up the key.

"Barracks G?" He had a confused expression on his face, "Hey Henry, have you ever heard of Barracks G?"

The other guard thought for a moment and the shook his head, "Nope."

"Check the map." The first guard ordered.  The second guard checked the large map pinned to the wall of the guard shack.  Suddenly his eyes went wide.

This sounded very suspicious to me.  I had been in uniform for about Two years, but most of the time I spent on deployment with the Wars Readiness Spares Kits (WRSK pronounced "Risk") as part of the Rapid Deployment Force.  At this moment in time, I wished I had a desk job like most of my logistic buds back at home base getting a good night's rest.

Here I was following the others out the front gate and into the jungle under the sympathetic eyes of Scott and Henry.  We might as well be headed off to our own executions.

If you have ever walked a jungle road after sunset, just close your eyes and you'll get the idea.  Some of the others had flashlights, but of course, I did not.
"What the hell was that?" The guy in front of me pointed.

"That has to be the biggest spider I've ever seen!" Another guy with a flashlight proclaimed.

Then I saw what had their attention.  Twelve inches were between one leg and the other.  Later, much to my relief, I found the creature from some H.P. Lovecraft story, was a coconut crab, but in the scant light, it looked like a spider, I swear.

"Hey, I heard they found a Japanese pilot hiding in the jungle around here back in 1973." The guy ahead of me told the guy next to him.

"Wow, not even ten years ago."  He chuckled, "Hey, do you think there might be another one hiding out in this jungle?"

It took us about an hour to get to the chain linked fence with the gate chained and locked by a single padlock.  The sergeant took out his key.  With a twist, the lock remained, "I can't get it off."

The second in command stepped forward and attempted to do what the sergeant in charge could not.  He could not and shook the chain in frustration.  one of the links was rusted through and the chain fell to the ground once the link gave way.

"Very good, sergeant." He pushed the gate open leaving his second in charge standing there with his mouth agape.

We all walked through the gate as the sergeant remarked, "I hope that idiot got the generator to work."

It had never occurred to me that we might be sleeping in total darkness, but at this point I was so exhausted, it wasn't going to make that much of a difference to me now.

What did make a difference is what happened next.

The sergeant turned on the lights with the flick of a switch.

The black wall became white as a thousand big bugs fled the room in the sudden glaring fluorescent lights in the overhead fixtures. These were the biggest bugs I had ever seen, some had wings, some hopped, some had segmented bodies, but the number and size was the stuff of nightmares.  Every Single one of us to the man gasped in horror as the wooden floors were covered with big bugs scurrying to get out of the garish light that had not been turned on in perhaps decades.

"Ahhh!" One of our number screamed like a girl when he pulled back his navy sheets only to discover a big black bug with claws which at the moment he was not afraid to use.

With a towel wrapped around another of our number screaming, he was running in flip flops and being chased by the biggest beetle I had ever seen as the guy attempted to take a shower.

There are memories we have that occur in a brief flash of time.  This was one of those times.  In less than a minute, I was immersed in indescribable horror.
The sergeant even took a step back as he was cornered by a dozen killers.  In a dry voice, he declared, "Boys, welcome to Guam!"

One of our number found an ancient fan marked with a GE on the grill and a blade that resembled a propeller.  He plugged it into a vacant socket and flicked the bulky toggle switch.  The blade went around twice, dust rose like a cloud before the motor exploded into an orange flame and fell to the floor never to be used again.

You could hear the big bugs legs move across the wooden floor that sounded like a stampede of cattle.

One of our number screamed.  As he ran by me, I could see the cause of his distress, four large bugs were clinging to his white t-shirt.
Even as exhausted as I was, sleep did not seem likely.

"Gentlemen." the sergeant addressed us in the middle of the open bay Barack, "You are now acquainted with jungle beetles.  They may be big and ugly, but they are not dangerous."

"You hope." Someone called out from the back.

Pulling back my sheets, I did not see any big bugs.  Slowly l got in.  No need for a shower since the water did not work.  Maybe in 1945, the GIs had some hot water, but the trickle that came from the rusty showerheads would not be adequate to clean the funk off my body.  I could wait a few hours to get to Korea.

In the morning when I awoke, the big bugs were gone and I was surprised at how deeply I had slept considering the adversity we had gone through.
We had survived!  Against insurmountable odds, we had made it.  This would be a war story for the times.

They sent a blue bus to pick us up and drive us to the tarmac where our C-141 had been cleaned and revealed and waited for us to complete our trip to Team Spirit in Korea.

Sitting in my seat, it felt like I was wearing a second skin of dirt and sweat, but in ten hours we'd be there.

I do not remember the takeoff as I was already asleep.  I slept through most of the flight.

We landed at Kunsan Air Base after sundown.  There was a blue bus there to drive us to our Team Spirit village.  As the bus pulled in the parking lot, I saw hundreds of tents set up on wooden platforms.  This was to be our new home for the next five months.  When I stepped off the bus, the wind blowing in from the North China Sea bit me hard.

"I need a hot shower." I shivered.

The bus driver looked down at me with deep sympathy and said, "Good luck.  They shut off the hot water at eighteen hundred hours and that was over two hours ago."
​
It would be one of the coldest nights I'd ever experience, but that's a story for another time.