In this quirky quick read by Anna North, we meet Ada, a 17 year-old bride who is kicked out of her family because she cannot bear children and in a time when this was equivalent to being a witch she runs away to a place called Hole in the Wall to become an outlaw.  As an apprentice to her midwife mother, Ada learns about how to birth children as well and becomes a valuable member of the gang.   At the Hole in the Wall, Ada meets a charismatic character who is determined to create a safe place for outcast women.

While I am not a big fan of alt-history, Anna North seems to make her characters come alive and pulling more truth out of fiction once again as we debate the role of women in our history.  The subtext is women’s sexuality up against the politics of the Old West as we know it.  This is a work of contrasted perception of woman as we once again debate the rights of women over their own bodies.  What you wind up with is Handmaid’s Tale vrs. Butch Cassidy and the Sundance Kid.  In the start of the novel Ada unable to have children is treated as an outcast.
​
Anna North weighs in with her novel filled with characters who did not choose to be filling the role they have been assigned to and very often in our own society, we meet people who did not choose the sexual roles that they find themselves a member of.  This is a book that opens up some of the questions we have been too polite to ask. 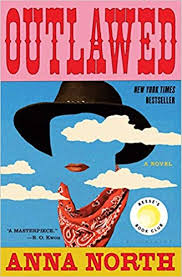